"No no-fly zone: ‘Military intervention in Syria will lead to catastrophe’
Russia says the creation of a no-fly zone over Syria under a humanitarian pretext would be illegal. Foreign Minister Sergey Lavrov was responding to a recent US statement claiming it could successfully implement the measure in the conflict-torn country. Let’s get the details from RT’s Egor Piskunov outside the Foreign Ministry building in Moscow."

August 6, 2012 - Accurately described as bigots and hooligans, the 3 member musical band known as "Pussy Riot" is now on trial for "hooliganism motivated by religious hatred." This came after they burst into a church in Moscow, disturbing the peace while mocking the beliefs of practitioners in an attempt to protest against Russian President Vladimir Putin. Had skinheads done something similar in a synagogue in the West, surely they'd have long ago paid steep fines and begun their lengthy jail sentences for "public insults based on origin, religious affiliation, race or ethnicity" (and here).

The Guardian's article titled, "Pussy Riot trial 'worse than Soviet era'," opens immediately with overt propaganda, describing the courtroom and Russian flag as "shabby" and a police dog as "in search of blood." The British paper attempts to portray Russia itself as having a "stark divide" between conservatives and liberals, the latter fighting against the state "with any means it can."

Already the Guardian runs into trouble - by portraying Russia as "divided" it is dismissing recent elections that granted Vladimir Putin and his United Russia party a sound mandate to lead the country. And while it is true that in reality, between voter turnout and Putin's garnering the support of 63% of those that did turn out (in a 5-way race), only about 40% of Russia's total registered voters actually voted for Putin, his mandate is still sounder than that of US President Barack Obama's 32% in a mere 2-way race, or last year's victory here in Thailand by Yingluck Shinawatra with a tenuous 35%, a victory hailed by the Western media as a "sweeping" mandate. 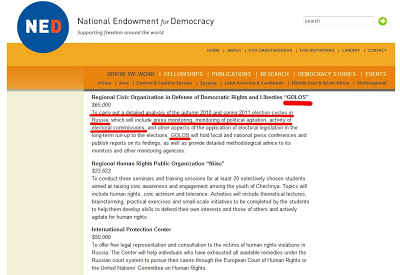 Image: Screenshot taken from the National Endowment for Democracy website featuring US funding for the NGO "GOLOS." GOLOS allegedly was searching for "election irregularities" in Russia's recent elections" GOLOS and other US-backed NGOs and opposition parties are now attempting to trigger an "Arab Spring" in Russia. (click to enlarge.)
....

It should also be noted that Russia's recent elections were marred by election monitoring NGO "GOLOS" attempting to call the results fraudulent. It would be later revealed that this NGO, billed as "independent" by the Western press, was in fact funded and directed by the US State Department via the National Endowment for Democracy (NED). Attempts by Wall Street and London to frame the elections as fraudulent set the groundwork for a wider campaign of political destabilization - a campaign "Pussy Riot" has now become a key player in.

Tasteless PR Stunt the Work of the US State Department

The Guardian however is absolutely correct when they call the "Pussy Riot" proceedings a "show trial." However, they are wrong in claiming that the showmanship is the work of the Russian Federation. Instead, it is showmanship put on by the Western media and the US State Department's vast network of faux-NGOs.

The Guardian's entire article is propaganda written with a literary rather than journalistic tone. The article itself cites the defendant's lawyer whose comments form the very basis of the article's title. And while the Guardian may prey successfully on the emotions of ill-informed, unsuspecting, but well-intentioned readers, it lets slip several telling clues as to who is really behind the showmanship.

According to the Guardian, the defense "tried to call 13 witness, including opposition leader Alexey Navalny." Navalny, of course, is a longtime operative receiving both political and financial support from the West in efforts to undermine the Russian government and bring back the days of Wall Street and London's unhindered plundering that marked the 1990's.

Alexey Navalny was a Yale World Fellow, and in his profile it states:

"Navalny spearheads legal challenges on behalf of minority shareholders in large Russian companies, including Gazprom, Bank VTB, Sberbank, Rosneft, Transneft, and Surgutneftegaz, through the Union of Minority Shareholders. He has successfully forced companies to disclose more information to their shareholders and has sued individual managers at several major corporations for allegedly corrupt practices. Navalny is also co-founder of the Democratic Alternative movement and was vice-chairman of the Moscow branch of the political party YABLOKO. In 2010, he launched RosPil, a public project funded by unprecedented fundraising in Russia. In 2011, Navalny started RosYama, which combats fraud in the road construction sector."

The Democratic Alternative, also written DA!, is indeed a National Endowment for Democracy fund recipient, meaning that Alexey Navalny is an agent of US-funded sedition. And despite posing as a champion for "transparency," Navalny is willfully hiding this from his followers. The US State Department itself reveals this as they list "youth movements" operating in Russia:

"DA!: Mariya Gaydar, daughter of former Prime Minister Yegor Gaydar, leads DA! (Democratic Alternative). She is ardent in her promotion of democracy, but realistic about the obstacles she faces. Gaydar said that DA! is focused on non-partisan activities designed to raise political awareness. She has received funding from the National Endowment for Democracy, a fact she does not publicize for fear of appearing compromised by an American connection."


Navalny was involved directly in founding a movement funded by the US government and to this day has the very people who funded DA! defending him throughout Western media. The mention of co-founder Mariya Gaydar is also revealing, as she has long collaborated, and occasionally has been arrested with, Ilya Yashin, yet another leader of a NED-funded Russian "activist" opposition group. 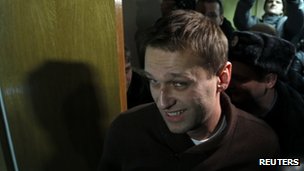 Photo: Alexei Navalny, Yale World Fellow and co-founder of US National Endowment for Democracy Da! or "Democratic Alternative/Yes in Russian." It is yet another Otpor-esque organization courtesy of the United States government and willful traitors to their motherland.
....

If "Pussy Riot's" defense is calling up a documented agent of Western interests as a "witness," one wonders under what context and to what degree Navalny, and by consequence, the National Endowment for Democracy, is involved with the defendants. Navalny admits that he is "acquainted" with one of the band members, but was not actually a "witness," and rather would have testified in order to "defend law and justice."

Clearly then, the defense's attempts to include him in the trial were politically motivated, having nothing to do with either law or justice, and serves simply as a means to link "Pussy Riot" to the US State Department's subversive opposition, many of whose leaders were caught filing into the US Embassy in Moscow earlier this year. 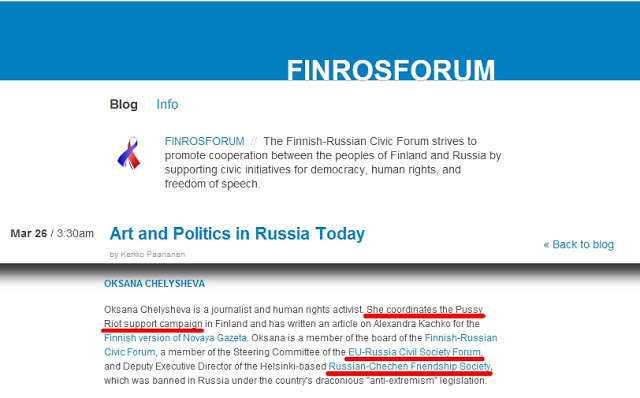 Images: "Pussy Riot's" support campaign is spearheaded by Oksana Chelysheva of the US State Department-funded "Russian-Chechen Friendship Society," a clearing house for Chechen terrorist propaganda. Along with US State Department-subsidized Alexey Navalny and the West's media outlets on their side, the hooligan anti-establishment "punk rockers" now on trial in Moscow have a decidedly "establishment" backing. (click images to enlarge)
....

Chelysheva was also "Deputy Executive Director" of the Russian-Chechen Friendship Society, fully funded by the US State Department via the National Endowment for Democracy. The "Friendship Society" was essentially a public relations front of Al Qaeda-aligned Chechen terrorists ravaging Russia's Caucasus region - a plot offered new relevance as the US, NATO, and Gulf States openly support similar groups of terrorists now ravaging Syria. The "Friendship Society" served a similar function to the now discredited "Syrian Observatory for Human Rights."

While it is unknown, so far, whether or not the members of "Pussy Riot" were contacted by any of these groups, or by the US State Department or its subsidiaries to carry out their hooliganism, it is clear that these groups and the US State Department itself has turned an otherwise tasteless disturbance of peace and a violation of Church-goers' rights to practice their faith without harassment, into a point of political leverage against Russia.

Helping to push down on this political lever are propaganda outfits like the Guardian, portraying the trial as a case of liberal Russian opposition groups fighting against a judicial throwback to the Soviet Union. In reality, it is another Wall Street-London production in the same vein as Serbia's US-funded Otpor movement, the Kony 2012 fraud and the US-engineered "Arab Spring."